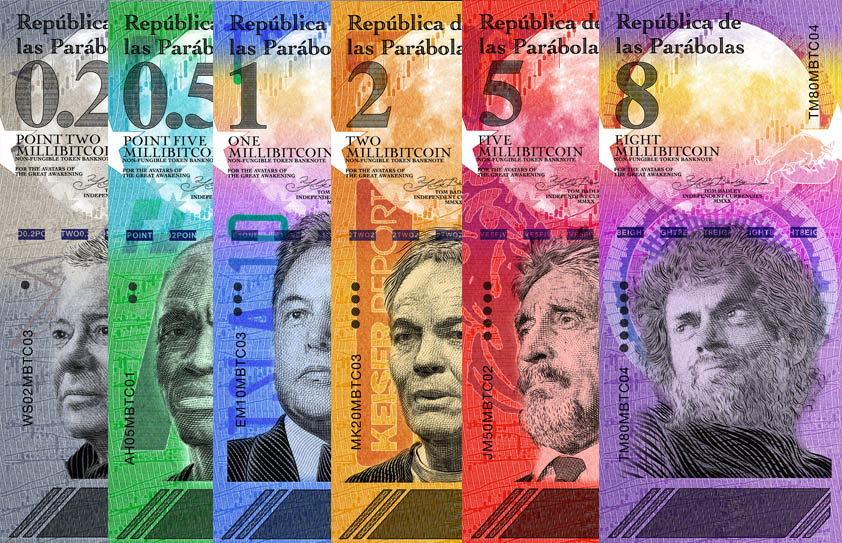 I made this series as a culmination of everything I had learnt, in terms of technique, since joining the crypto art community. One year ago, almost to the day, I attended CoinFest in Manchester, as a curious outsider. Since then and over the last 12 months, I’ve been engaged in making artwork on a full-time basis. It was a decision to embrace what I love, and it’s resulted in things that I wouldn’t have believed possible.

This series also represents a snapshot of crypto at a certain point in time, in a format that is familiar territory to me – banknote design. I made the series as both a way to express my artistic journey over the last year, but also a way to neatly wrap up a view of cryptocurrency, as a transcendental, parabolic pathfinder to a new monetary system.

The last addition in the series – Terence McKenna – ties a bow on my feelings towards crypto, as a way of transcending the present system, to a establish a completely new way of transacting and a new way of being. The context for this is the juxtaposition of the the most critical liquidity crisis in history, combined with the introduction of the largest unsecured central bank money printing in history. It’s perfect that this is a series of banknotes – everything we’re living through is what Bitcoin, and others, was made for. Just as Satoshi’s genesis block referenced unprecedented 2009 bailouts, we’re once again at a crossroads in monetary history.

This series represents a farewell to a one facet of the crypto universe – the punditry, the parabolic rise, the fun memes. Now begins the very serious task of transcending our situation, with an energy that matches the inhumanity of the fiat-money based system.

I believe we’re entering a completely new reality, and new forces are calling me to push my work in new directions. So this series also represents a farewell to a chapter in my artistic journey. The next chapter will go deeper, will be more deliberate, and will match the energy of the times we’re living in.

The next chapter begins now!