Tom Badley is a British artist with a unique story: he creates art with the same style and techniques as used to print banknotes. Not only that, but he was one of the early artists to see the potential in NFT art – digital art on the blockchain.

Paper money has often inspired artists, such as Banksy and Warhol. But while other artists may appropriate banknotes as a material, or deface them, Tom Badley literally ‘makes’ money-like prints. The precise techniques of banknote production are a secret, for good reason. Tom owes this secret knowledge to his experience in the banknote industry; designing documents and banknotes for central banks and governments.

He attended Slade School of Fine Art, London, and the Cooper Union, New York. After graduating 2008, he continued to make art inspired by money, taking part in several group and solo exhibitions in London. But it wasn’t until he began working in the banknote industry that he found his ideal medium.

Often overlooked, the banknote is a jigsaw puzzle of print processes and artistic methods, designed to be counterfeit-proof – from engraved portraiture made of thousands of lines, precise pattern generation, typography, watermarked paper, and a myriad of other security features that aren’t commercially available. Not only does Badley know how to use these techniques, but this gives his physical prints anti-counterfeit properties too: the holy grail of the art world, which often struggles with provenance and authenticity issues.

While his physical pieces are provably authentic, his digital pieces are all verified and secured on the blockchain. He was among the early wave of artists to seize blockchain as an artists’ tool, tokenizing his first NFT (Non Fungible Token) on the Ethereum blockchain, on June 27th 2019 – before anyone in the mainstream was looking at NFTs and ‘Crypto Art’.

He enjoyed early success in the Crypto Art community, creating a series of digital ‘banknote’ designs featuring champions of cryptocurrency, respected by those in the space. Since then, his work has featured in virtual exhibitions in the Metaverse – online worlds where digital assets are traded – and physical exhibitions, most notably in London in 2020, alongside compatriots of the Crypto Art space.

To date, Badley has tokenized over 100 NFTs across 4 of the biggest Crypto Art platforms: KnownOrigin, SuperRare, Rarible & BAE. His highest single sale for a digital work was around 9.8 Ethereum ($17,800).

Badley’s use of security printing techniques offers a perfect synergy with crypto art, and cryptocurrency. As the ‘face’ of cryptocurrency is mostly a blank slate, having no jurisdiction or issuing body, Badley’s work creates a ‘face’ for the frontier of finance with the same gravitas as existing currency.

In this way, his work and story are comments on the humanistic impulse to make art – to escape the literal machine of the money printer, and become ultimately self-sufficient with the same ability to design, devise, and issue money in the form of art – whether physical pieces, or digital assets on the blockchain. 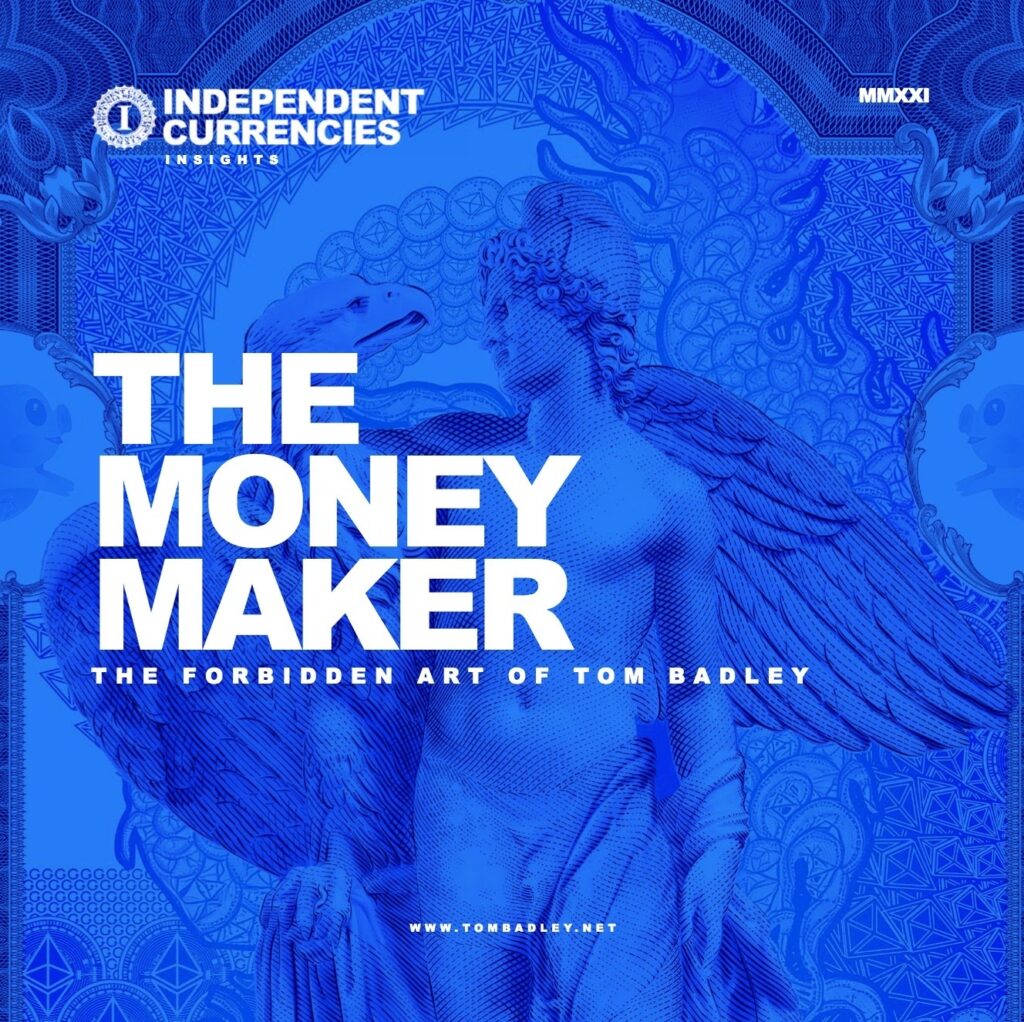